My new project is a really pretty garden shed for my back yard. This photo is from the book I have with the plans. 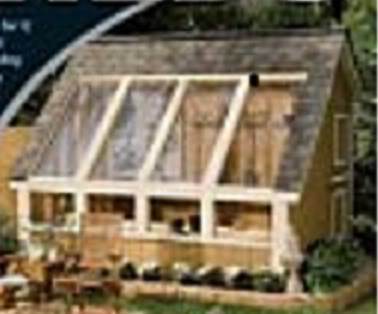 The style matches my house so it will blend in really well. It’s 10 X 12 feet.

My specific goal for this summer is to build the foundation/floor. It took me quite a while to dig up to courage to start, but now that I have, I feel pretty confident I’ll be able to complete it – hopefully by next summer. 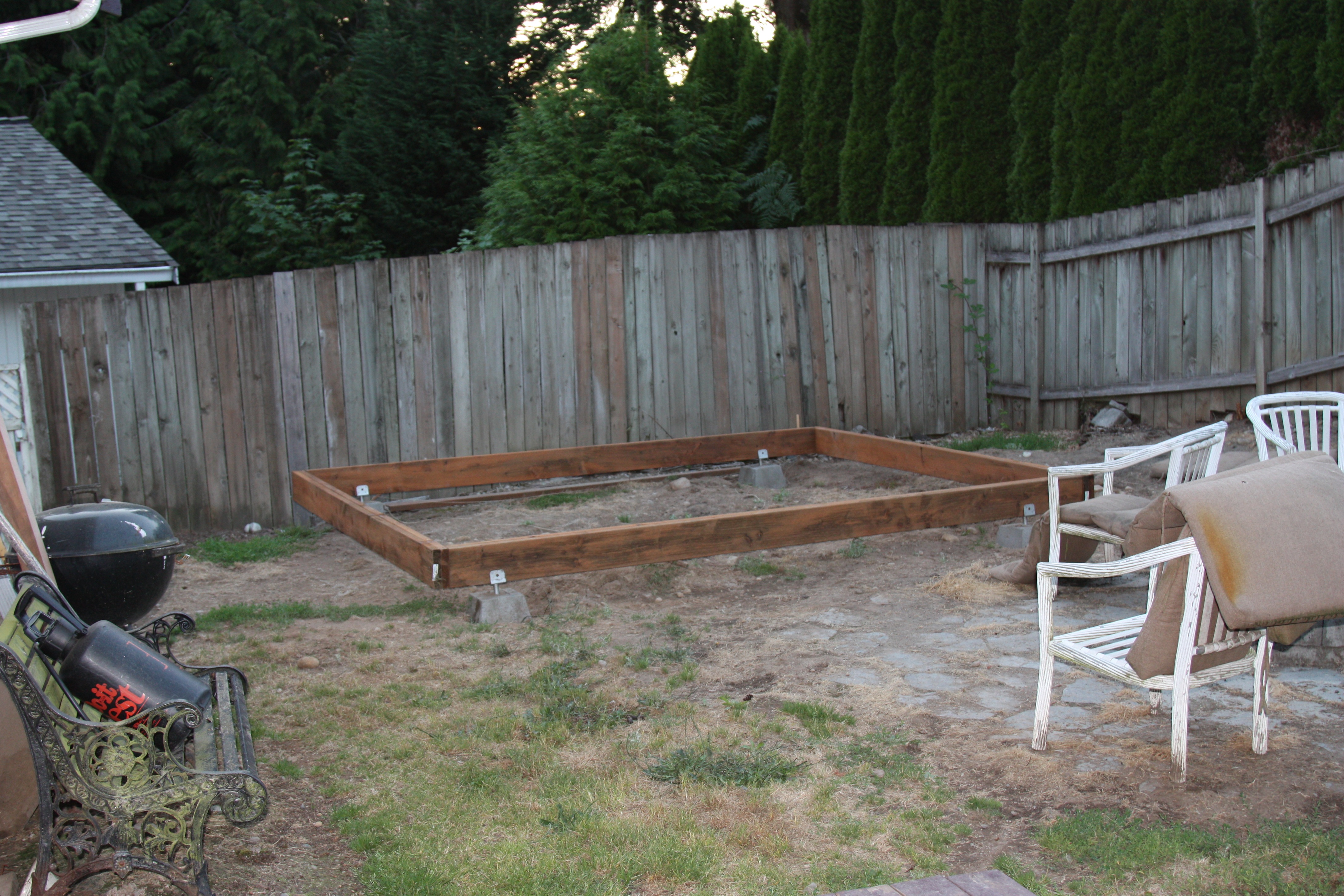 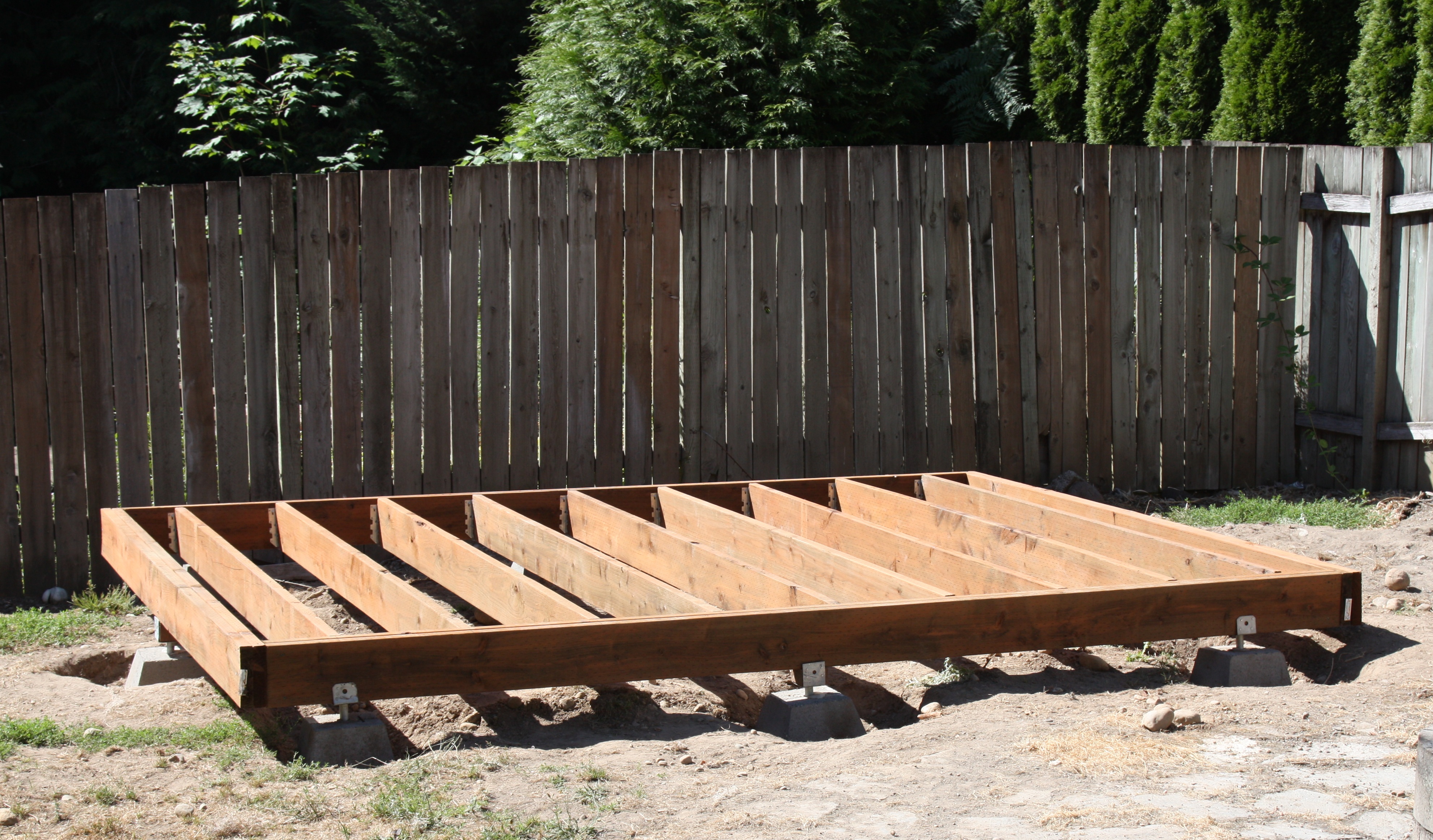 August 13, 2010 – I am making progress! Once I got past my fear of doing this by myself, it is going well. I’m finding that if I read the instructions too far in advance, I start to think I can’t do this. What I’m learning about myself is to trust that with a little patience, and a lot of concentrated thinking, I can do it. I’m also not reading too far forward anymore. Just one step at a time and it doesn’t seem so overwhelming. 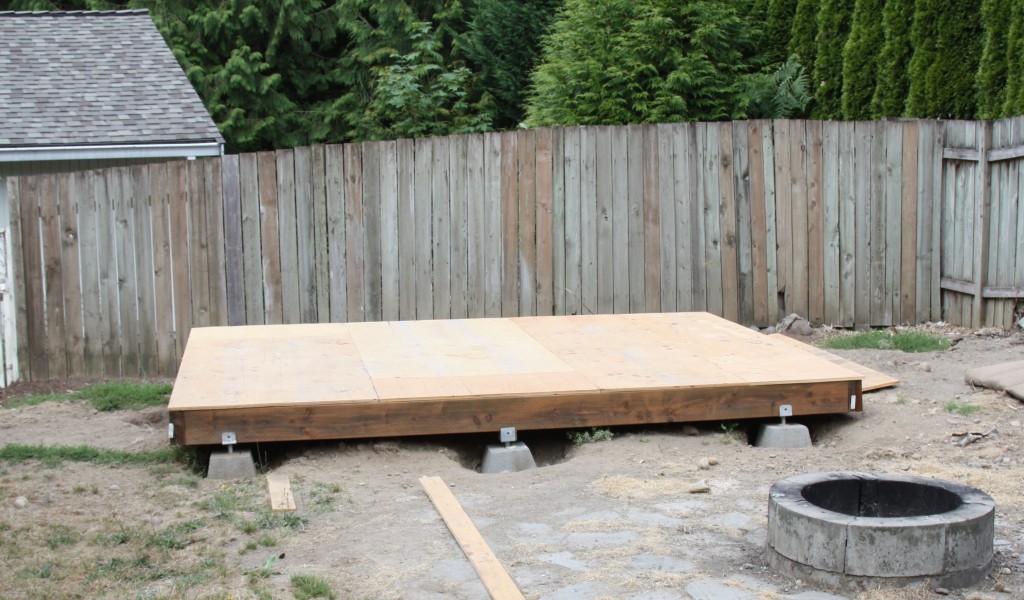 This is such a challenging project for me. Mentally and physically. Reading construction plans is definitely a new experience. And it’s very challenging work physically for me.

And the back wall and lower front wall on August 22, 2010. And yes… because I’m such a noob at this, the foundation is actually a bit larger than the building will be. I’ll have to figure out a way to hide that when this finished. 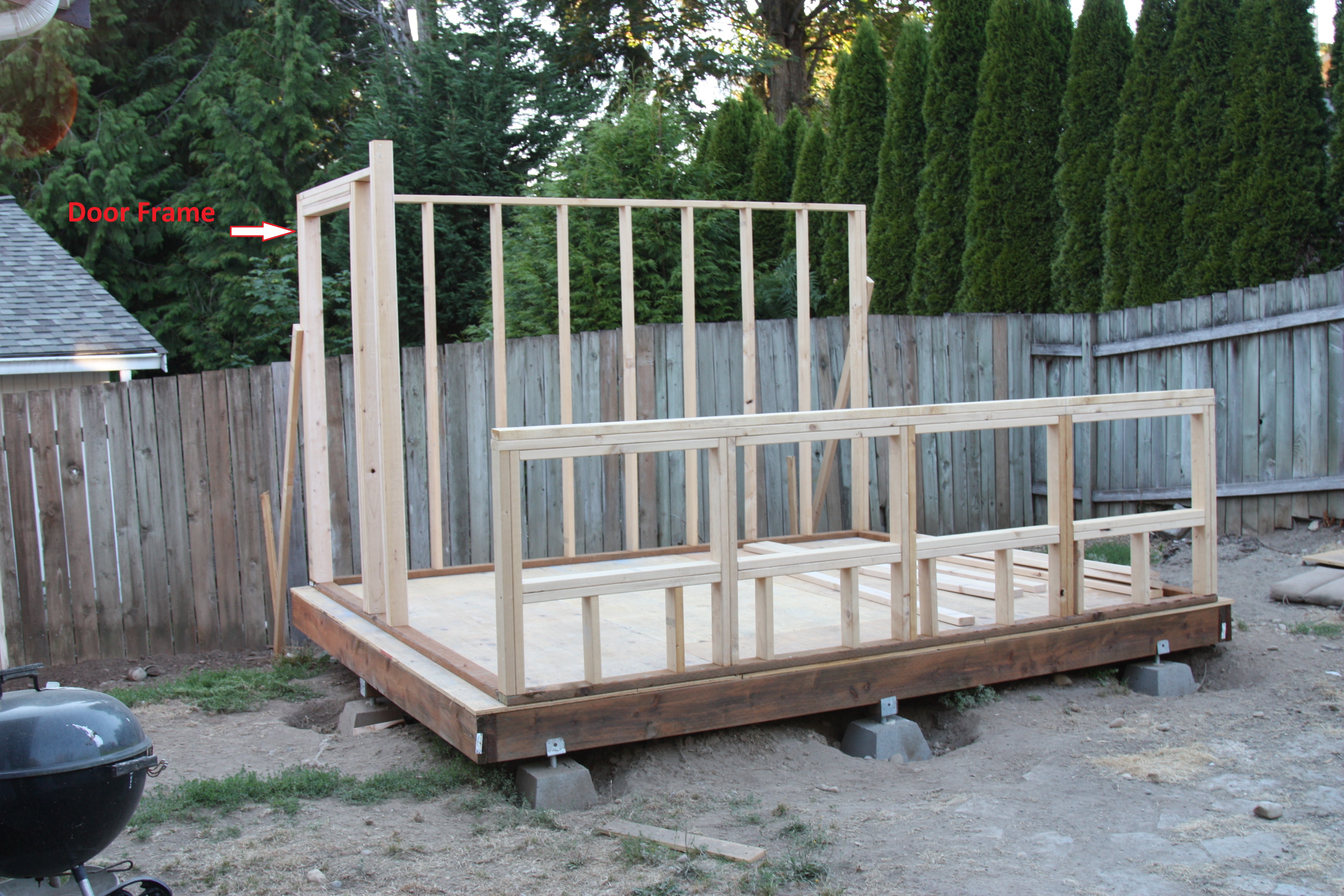 August 25, 2010, I finished the side wall with the door frame. Whew…. that seems like a huge accomplishment. 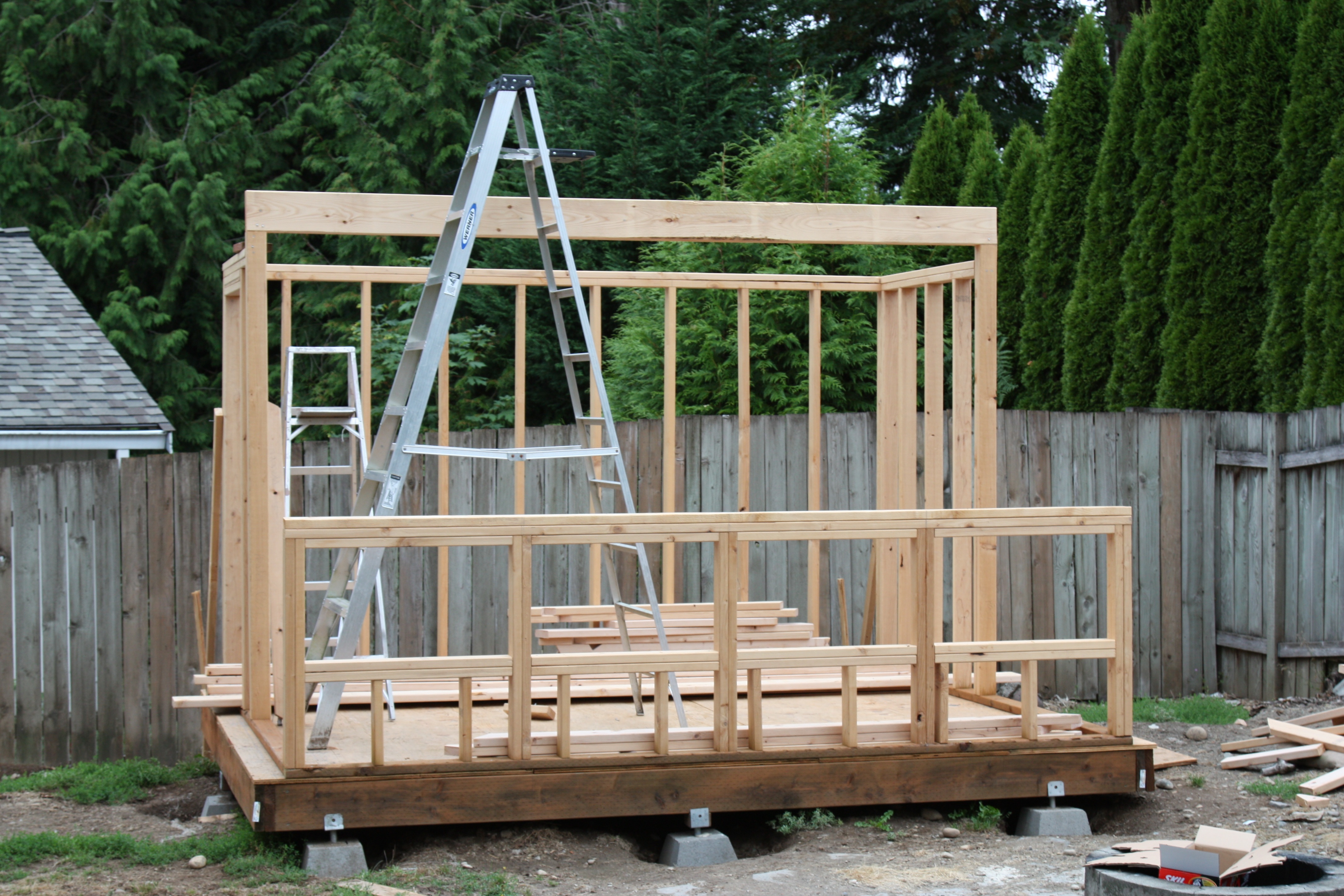 September 4, 2010. Labor Day Weekend and I was hoping for some nice, warm summer weather to work on it. I have to keep reminding myself that this is the Pacific Northwest where we go from 85 and sunny to 65 and cloudy overnight. And I’ve learned something new today – damp wood doesn’t cut easily so I’m having to wait until later today when it warms up a bit to finish cutting the roof rafters. Here’s what it looks like now. Am really hoping to get the roof on before I have to put a tarp over all of it for the winter. 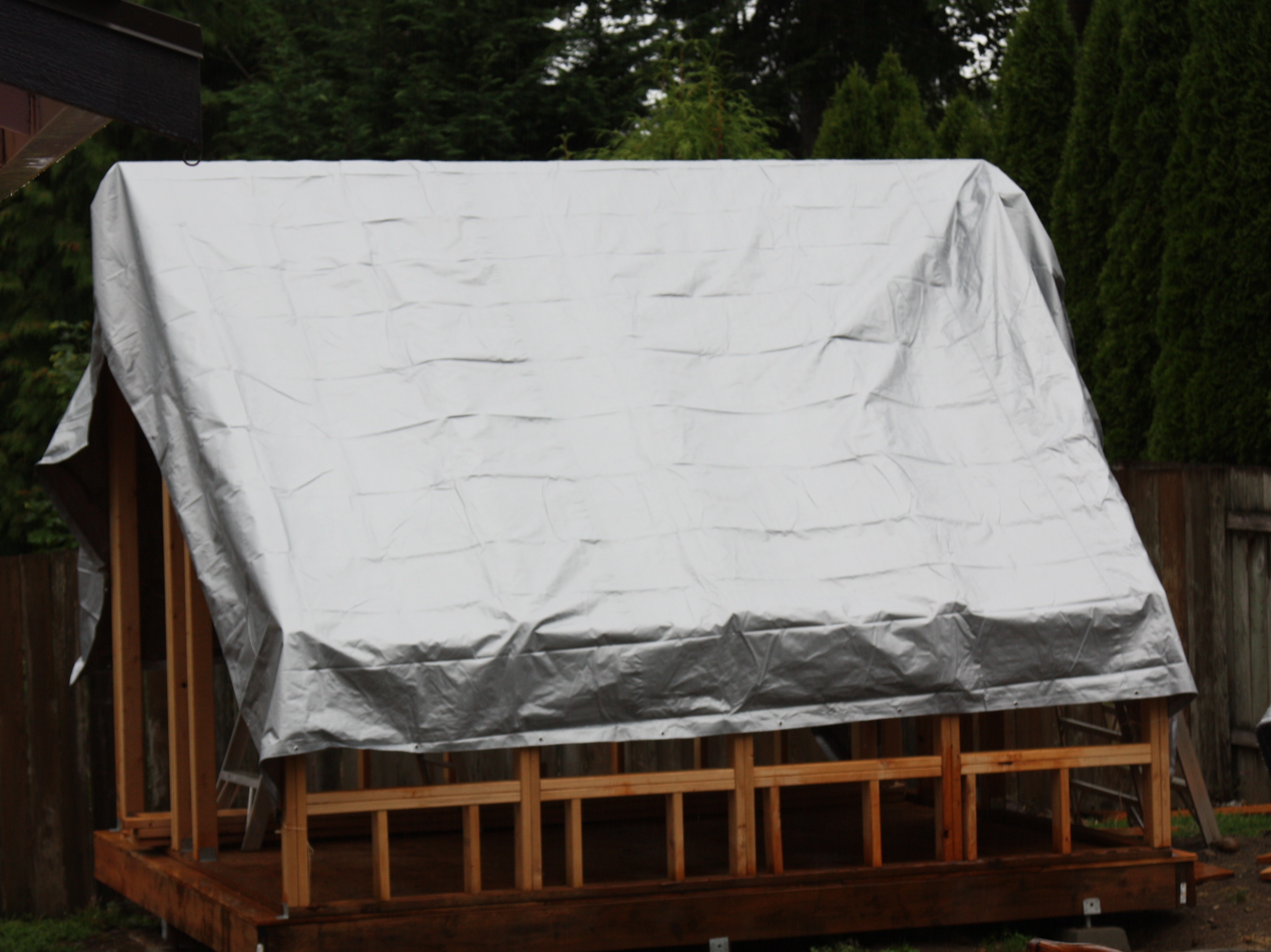 September 6, 2010, 6 PM End of Labor Day Weekend and all of the roof rafters are done – thanks to Ryan for his help!

Just as we were finishing the last rafter, the rain started. We quickly put up the tarp which will keep it dry until I can start working on it again – hopefully later this week.

September 12, 2010. Ryan is in Dallas for a couple of weeks and I promised him I would not climb too high on a ladder to work on this while he’s not around. Plus, my hands have really taken a beating with this project and they are very, very sore. I did get the front large window headers installed, as well as the stud above the door. I also reinforced the underside of the rafter brackets. So, even though it doesn’t look different, I’m making progress, slowly but surely. 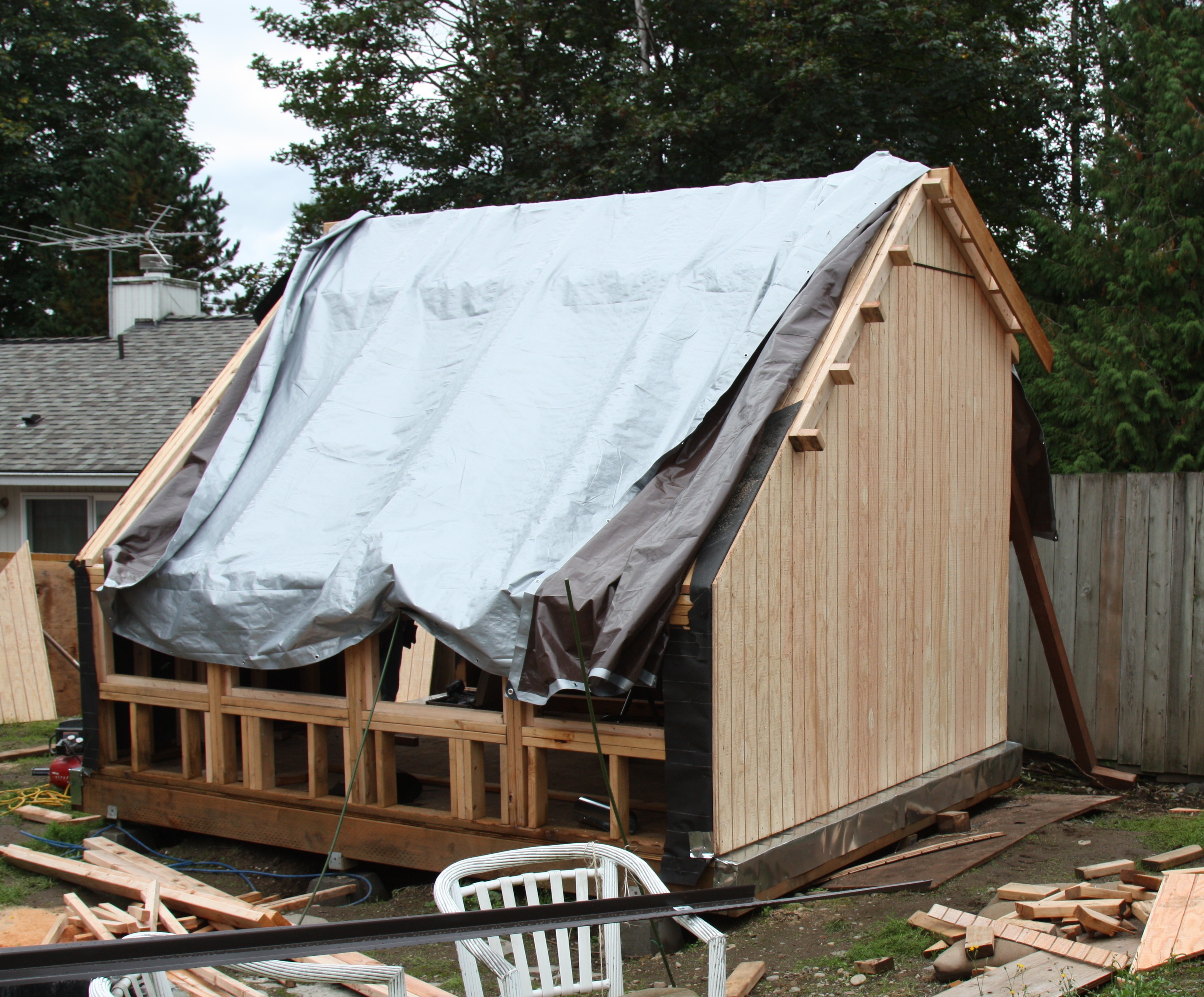 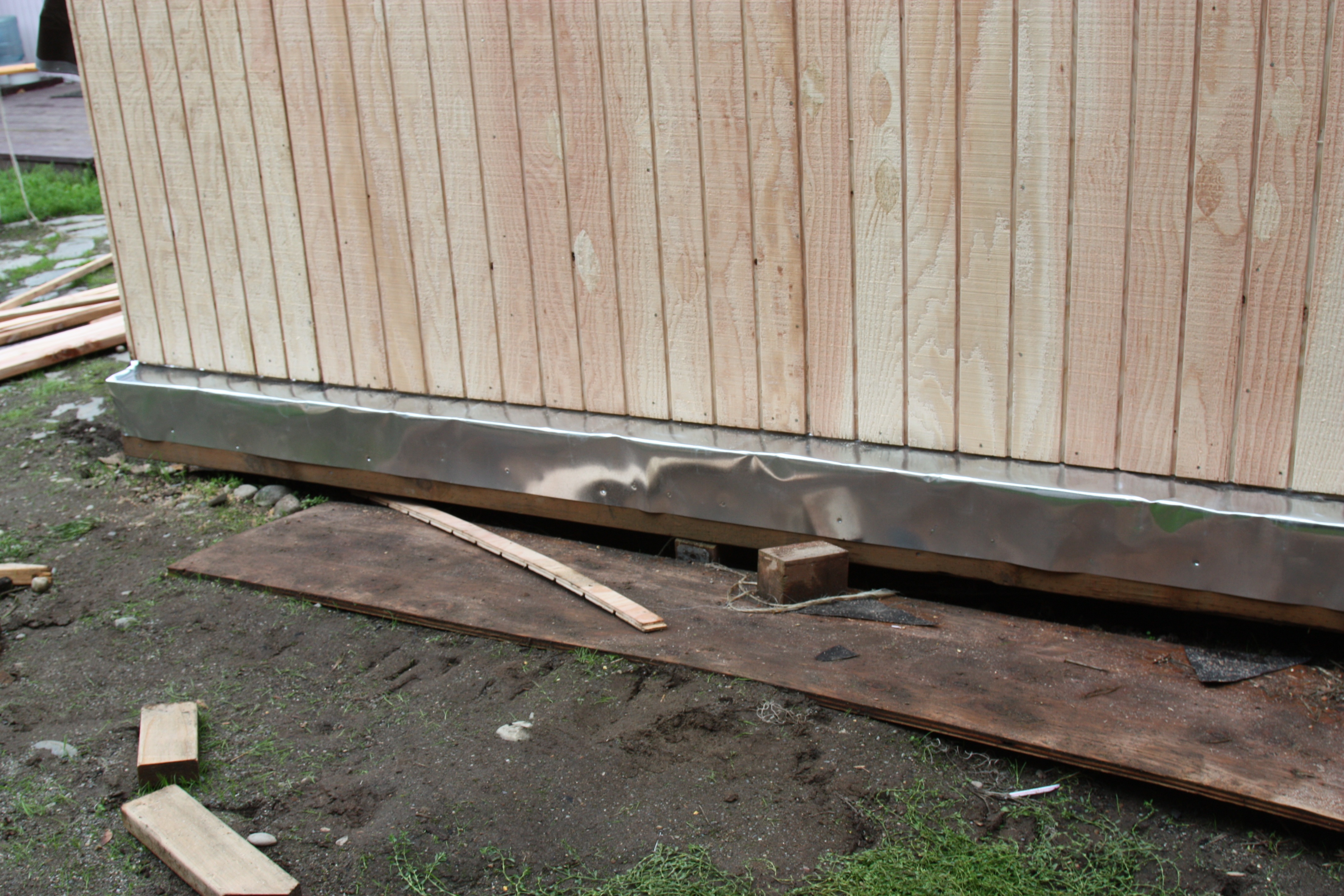 The north side and south side with the siding started. I am using flashing to prevent damage to the foundation where I neglected to build it out to the edge. 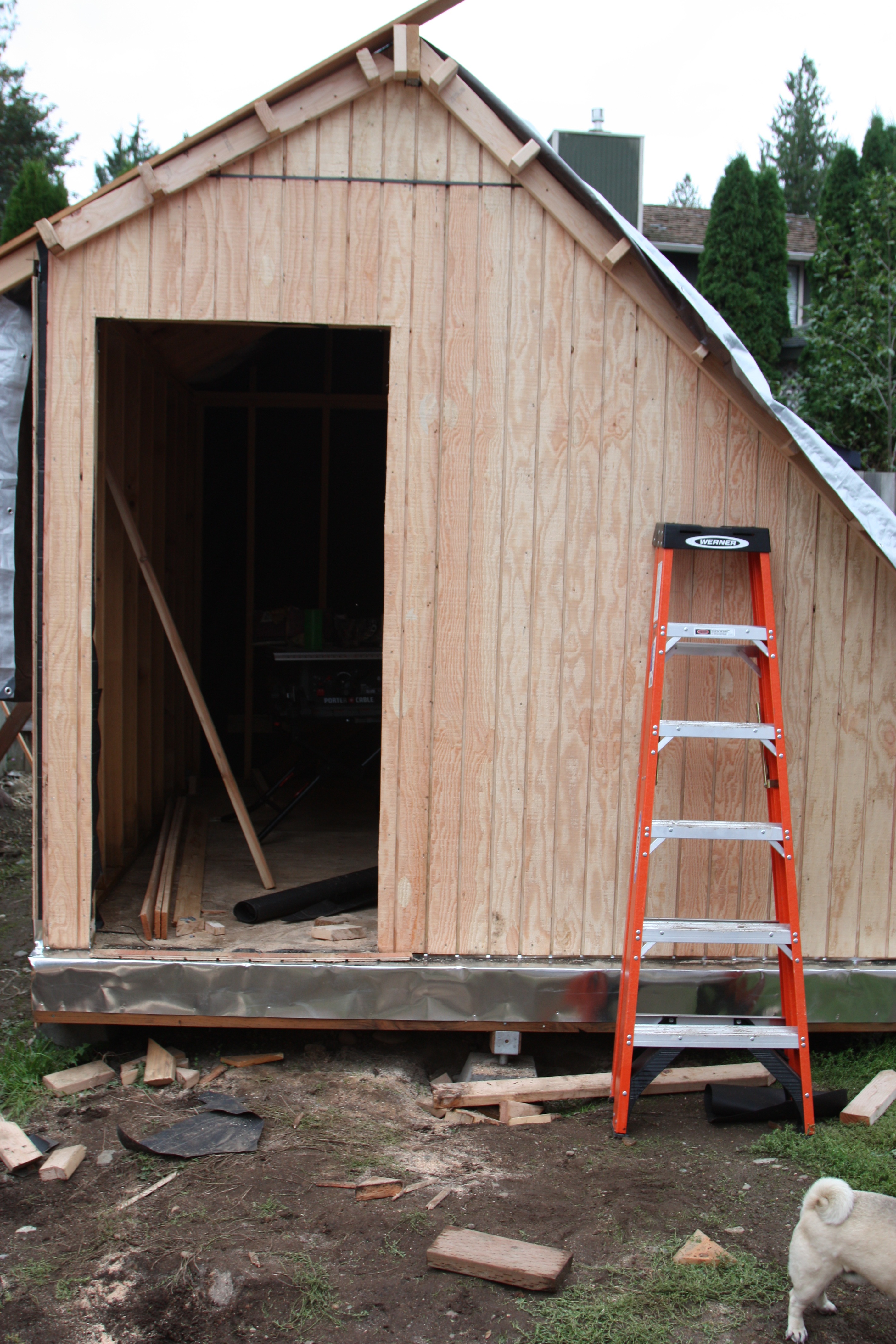 Framing this shed out myself has really aggravated the pain in my hands. If I’ve learned anything in all of this, it is to recognize when to ask for help. To prevent any further damage to my hands, I’ve hired a really terrific handyman to help me finish this.

I still need to paint the trim on the double door but everything outside except the ramp, and landscaping around the foundation is done.

I installed a photosensitive outside light that goes on at dusk and off at dawn as noted in the pic below. Because of the beautiful glass windows, it is a very bright and light garden shed during the day. I installed a 48″ T12 light unit inside though which will provide really nice and bright light if I ever need to work inside when it’s dark.

The large glass windows allow rain to fall right to the ground because there is about 1″ between the cedar framing and the glass. Not exactly what the plans called for but I like it better. 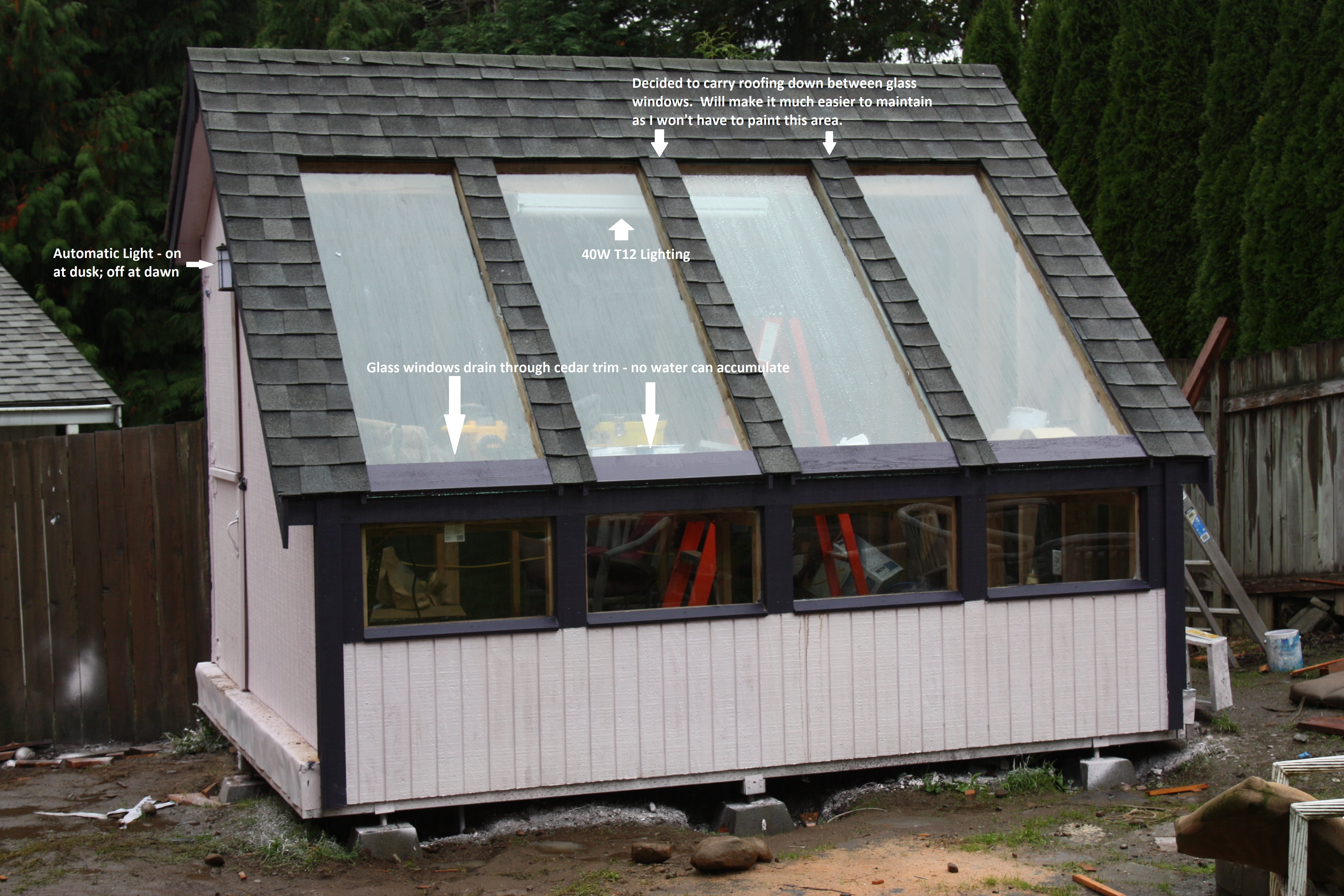 I will be putting down some vinyl tile flooring and installing peg board and maybe some organizers inside – probably next spring.

It’s a beautiful, chilly fall day here so I decided to prep the plywood floor for vinyl tile installation. Had to use floor leveling spackle and sand. And now my hands are really, really sore.

The directions for installing the vinyl floor tile require the tile to be stored for 48 hours at 65 degrees before installation, and than installed at no less than 65 degrees. So I ordered a space heater for the shed. Has a thermostat so I should be able to get the floor installed and than keep the shed at no lower than 55 degrees.

My beautiful garden shed has been a challenge because I didn’t install any ventilation – which means it gets really hot in there in the summer. Bottom line is it has become a storage shed more than anything else.

To solve that, I decided to go with a cupola on the roof for ventilation.

I found this wonderful, perfect size cupola and weathervane while researching the various methods for adding ventilation. And it was installed yesterday (June 12, 2018). 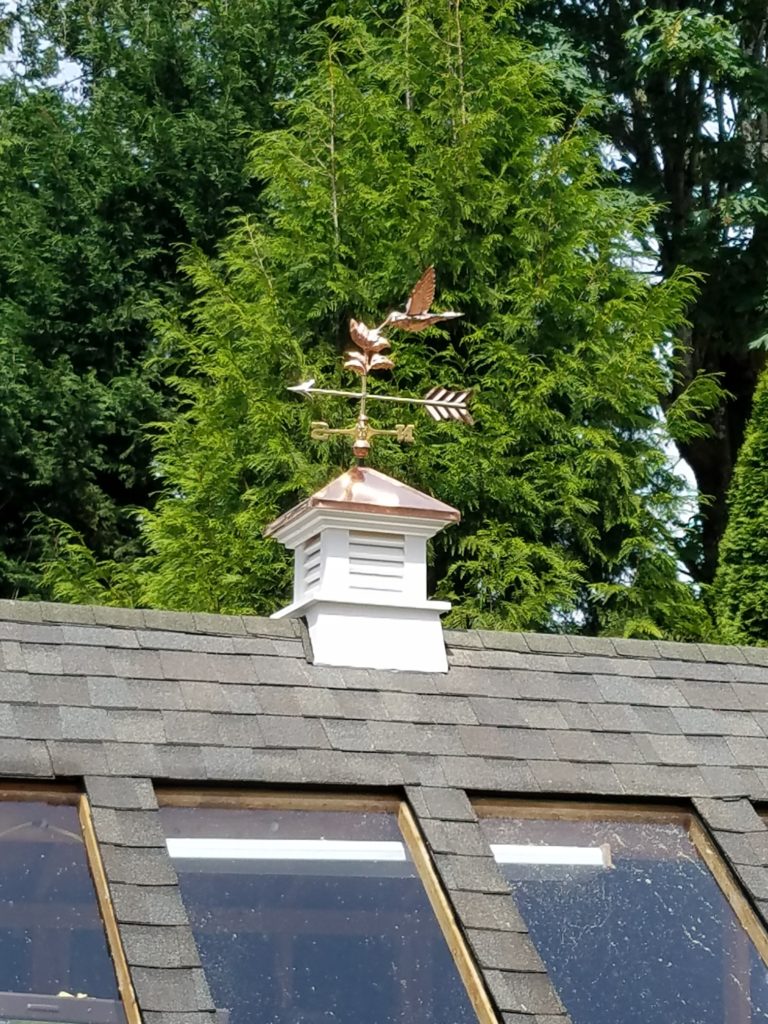 Now the next step is to get it all nice and organized so I can really use it for my bonsais.